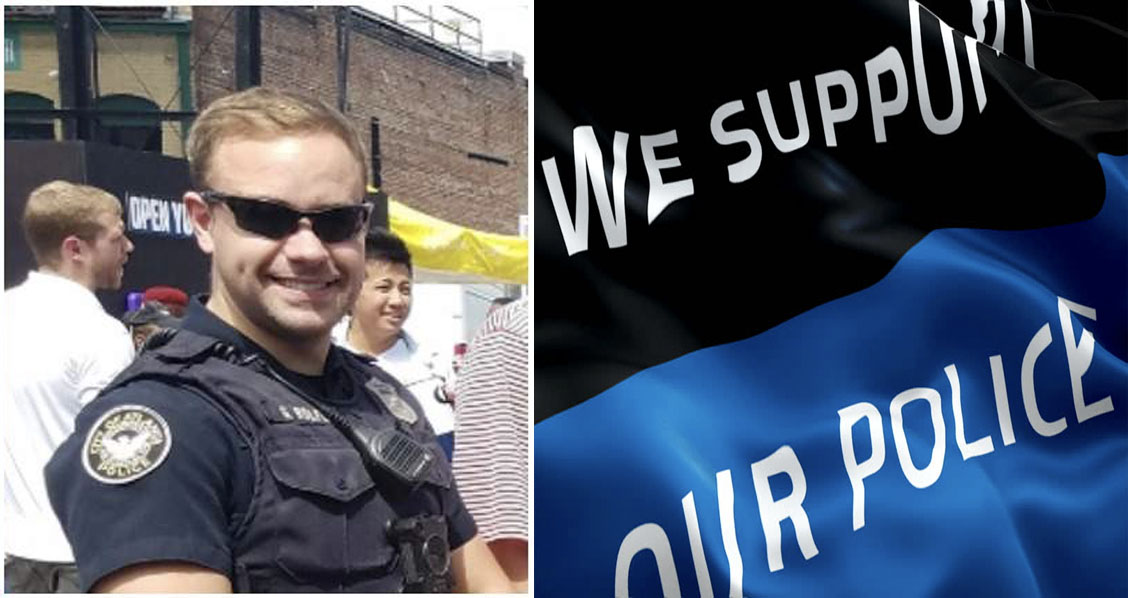 JUNE 14th: Officer Rolfe was fired from the Atlanta Police Department by Mayor Keisha Lance Bottoms prior to the investigation into the event by the GBI even starting.

The Georgia Law Enforcement Organization (501c3) general fund is our in-house fund that is used when officer’s experience a life-changing event. Whether that is an on-duty injury, illness, wrongful criminal prosecution, or death; we step in to cover those initial costs for the family as it may take several weeks/months for their actual benefits to kick into action.

More than ever, these officers need your help and it’s time for the silent majority to make it known that the majority DOES care about law enforcement officers.

If you can’t afford to donate, we understand, and sharing this post among your friends/followers is just as helpful!

IF YOU WOULD LIKE TO DONATE TO HELP GEORGIA OFFICERS IN TIMES OF NEED, PLEASE VISIT:

“APD SHOOTING EXPLAINED
Before reading below, remember that officers are afforded the same constitutional rights as citizens, so whether they’re charged for political reasons or not, the facts of the case remain the same until their day in court:

So looking at this case, what do we know?

A DUI investigation determined that he was too intoxicated to drive. The bodycam showed the officers being overly nice and polite to him the entire time all the way up until the handcuffs were about to go on, as they should’ve been.

As soon as they tried to cuff him, an all out brawl took place. Not just resisting, but punching them in the face and throwing them around.

Charges:
DUI
Obstruction X2 – Felony
Battery on an officer X2
Aggravated assault X2 – Felony
Strong Armed Robbery – Felony
And believe it or not….
Possession of a firearm during the commission of a crime – Felony

Per Georgia Law, a taser is classified as a “less-lethal” FIREARM as they do occasionally cause death.
(OCGA 16-11-106)
________________
These offenses are important because there is a case law called Tennessee v Garner

What Tennessee v Garner states is:
“When a non-violent felon is ordered to stop and submit to police, ignoring that order does not give rise to a reasonable good-faith belief that the use of deadly force is necessary, UNLESS it has been threatened.”

So this goes back to the taser being classified as a firearm that can cause death or great bodily harm.
___________
So,
They fought
He stole the taser
He got up and ran

The 2nd officer chased after him and tried to use his own taser against him, but he didn’t get a good connection.

Brooks then turns, aims the taser at the officer, and fires. Statutorily, this is no different than firing a gun.

(The taser that APD carries has 2 cartridges, so Brooks could have potentially shot the officer twice.)

The officer dropped his taser from his left hand after it appears he was hit by a barb on the video, draws his sidearm, fires 3 shots, falls against a car in the parking lot and Brooks goes down.

Brooks was not only a continuing threat to the officer since he could still fire the taser again, but he also showed and EXTREME desire to get away, with a weapon. So it is not unreasonable to have the fear that he would use that weapon to carjack a motorist sitting in the drive-thru line, take a hostage, or otherwise hurt another innocent party.

The officer only needed one of those requirements, but he had all 4……..

Now the reason taser’s are considered “less-lethal” is because when used appropriately, you are “less likely” to kill someone vs using a gun. But Brooks hasn’t been through the training to know how to avoid certain vulnerable parts of the body, and he doesn’t understand how neuromuscular incapacitation (NMI) works, which makes it MORE likely for him to cause great bodily injury or death than if an officer used it.

And just to support the fact that tasers can and do kill, there is an East Point Officer currently sitting in prison for improperly using a taser and killing a man a few years ago.
(Eberhart v Georgia)

“He could’ve shot him in the leg!”

Right off the top, it is unconstitutional to do so. It is considered cruel and unusual punishment to employ a gun in that manner. Either an officer felt deadly force was necessary, or he should use a lesser response.

We could just leave it at that, but that’s too much of a cop out, so let’s discuss WHY it has been deemed unconstitutional. For one thing, that’s an extremely difficult shot to make. The target is quite narrow, and in continuous motion as the suspect runs away/charges the officer. Under the best of conditions trying to hit the leg is challenging…to be generous about it. But in a life or death encounter, the officer’s fine motor skills will be eroded by the stress of the encounter making the shot, turning a leg shot into a very low probability feat.

Assuming a round does hit the leg, then what? The only way a shot to the leg would immediately stop a threat is by shattering one of the bones, and stopping the threat is the ultimate goal. While it is very difficult to find a shot to the leg that will immediately stop a threat, it is actually comparatively easy to find shots to the leg which eventually prove fatal. Human legs have very large blood vessels which are essentially unprotected (femoral artery)

Now remember, we’ve had days to sit back, watch videos, discuss, and analyze this entire thing. The officers had less than a minute from the time the fight started, and less than 5 seconds to interpret EVERYTHING you just read while running, getting shot at with a taser, and returning fire.

“On June 12, 2020, a Wendy’s employee called 911 to report a man was passed out behind the wheel of his vehicle and blocking traffic in the drive-through. Officer Brosnan responded, and made contact with the driver, Rayshard Brooks. After determining alcohol may have been a contributing factor, he requested Officer Rolfe’s assistance. Officer Rolfe, a member of the High Intensity Traffic Team and the Governor funded HEAT Unit, has specialized training in DUI investigations. He has made at least 300 DUI arrests, and completed the 160-hour Drug Recognition Expert course, graduating as valedictorian. After a thorough investigation, Officer Rolfe determined Mr. Brooks was impaired and driving a vehicle in violation of Georgia law. Officer Rolfe was polite and courteous to Mr. Brooks during the entire encounter. Mr. Brooks was polite and cooperative until Officer Rolfe placed him under arrest.

Suddenly, without warning or provocation, Mr. Brooks chose to violently attack two uniformed police officers. Officers Brosnan and Rolfe used the least amount of force possible in their attempts to place Mr. Brooks into handcuffs. They attempted to leverage him to the ground while giving him loud, clear verbal commands. In response, Mr. Brooks continued actively resisting lawful efforts to arrest him. He then escalated his resistance by punching Officer Rolfe in the face committing several counts of felony obstruction of an officer. See O.C.G.A. §16-10-24. In an effort to place Mr. Brooks under arrest and stop his assault, Officer Rolfe lawfully deployed his TASER twice, but it had no effect on Mr. Brooks.

Mr. Brooks continued his assault and disarmed Officer Brosnan, stealing his city-issued TASER committing a robbery, another forcible felony under Georgia law. See O.C.G.A. §16-8-40 & O.C.G.A. §16-10-33 . Mr. Brooks, then armed, began running through a crowded parking lot. Mr. Brooks was lawfully under arrest and Officer Rolfe pursued him. Officer Rolfe had deployed his taser and held it steady in hopes the prongs would catch onto Mr. Brooks body and neutralize him. Unfortunately, that didn’t occur.

1. arrest a suspected felon when he reasonably believes that the suspect poses an immediate threat of physical violence to the officer or others,

2. to protect himself and others from a life-threatening injury

3. to prevent the commission of a forcible felony. Mr. Brooks violently attacked two officers and disarmed one of them.

When Mr. Brooks turned and pointed a Taser at Officer Rolfe, any officer would have reasonably believed that he intended to disarm, disable, or seriously injure him.

The Georgia Bureau of Investigation will complete an impartial investigation. Mr. Brooks’ family, the citizens of Atlanta, and Officers Rolfe and Brosnan, all desire a fair and thorough investigation including learning why Mr. Brooks suddenly turned violent. Officer Rolfe is well known to the courts and there is no compelling reason to bring any charges against them before the GBI has completed its investigation and published its findings.”