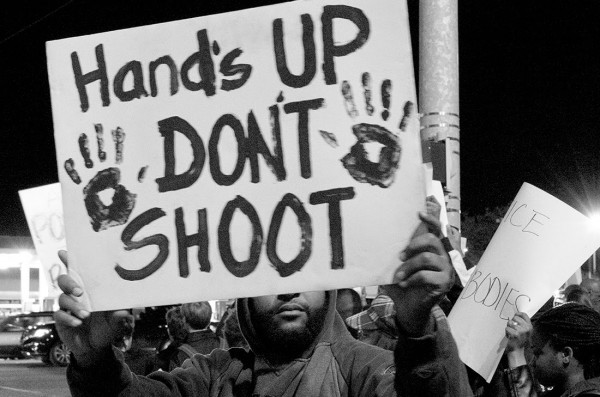 The American mainstream media has evolved from the days of iconic newsmen like Walter Cronkite and David Brinkley. Straight forward journalism, unbiased and fact-based reporting without parasitically attached editorial commentary or political spin, is increasingly elusive in print, online and broadcast media in 2019. Many believe the mainstream media cannot and should not be trusted, a notion actively propagated by President DonaldTrump as well as competing broadband outlets like Fox News and CNN.  Only a few networks and anchors fail to put political spin on display during a “newscast.” Their reporting is commonly accompanied by individual commentators or panels of pundits, many hired for their own political leanings, ever ready to spin actual news in a manner that supports their network’s politics and their viewers’ pre-existing biases. While some pose as objective, fair minded centrists, those further toward the political peripheries now clutter cable news.

In our post-Ferguson Missouri world, television viewers have come to expect “wall-to-wall” coverage of high-profile policing events, particularly those where law enforcement officers take civilians lives. These events drive ratings, giving networks plenty of incentive to fill time and evidentiary voids with panels of purported experts. That coverage invites uninformed criticism, speculation and guesswork under the false cover of news.Worse, these networks have the unfettered discretion to decide which news to magnify through their coverage and that which will be downplayed or ignored.Because police use of force incidents require more time for official investigations than the rapid news cycle allows, it can be hard for the public to sort truth from guesswork or spin when watching broadcast coverage. Ferguson was a glaring example of the media’s failure to challenge or even meaningfully question a self-identified eyewitness and his version of events. Instead, within hours of Michael Brown’s death, the media had found Dorian Johnson, and they were like moths to his flame. His lies were retold and repeated with a singular perspective.  The bell was rung, and the dies were cast. Weeks later, the truth started to get out of the gate but, as the adage goes, “A lie makes it half way around the Earth before the truth gets its boots on.”

“HANDS UP, DON’T SHOOT” WAS A PROVEN LIE

“Hands up, don’t shoot,” both the phrase and the related movement, became one of the enduring legacies of Ferguson. If one were toGoogle search that phrase, almost 5.5 million hits return, which is about 5million more hits than the phrase “Dorian Johnson lied” returns. Google aside, the same was true in life, where far too many accepted the lie of a surrendering Michael Brown being executed by Officer Darren Wilson. Many never bothered to look for the truth at the time or reviewed it in the DOJ report issued eight months later.  Worse than simply broadcasting Johnson’s story without fact checking it, the media was complicit in covering, and participating in, the ever widening histrionics playing out inCongress as politicians vied for camera time, in sports venues, and even in the CNN studio, as growing numbers of Michael Brown sympathizers assumed their own“hands up” poses for the cameras, reaching millions of viewers.

A more recent example of the impact of initial reporting before the facts were in and suggesting a fatal shooting by police was driven by skin color rather than the threat posed by a subject, occurred in Charlotte,North Carolina, in late 2016. Keith Lamont Scott, a 43-year old African-American, was fatally shot on September 20, 2016, by an African-American police officer.Police officers were in the area on an unrelated matter when they observedScott exit his vehicle with a handgun. After repeated demands for him to putdown the gun, police shot and killed him. Scott’s wife, who witnessed the altercation, disputed the police account and insisted he was unarmed. The incident provided an opportunity for Scott’s family and social media posters to damage police-citizen relationships in Charlotte and elsewhere. Their false and misleading commentary preceded two nights of rioting in the city. The media had its feeding frenzy and the opportunity for viewership driven up by the “breaking news” of renewed conflict with police after the fatal shooting of a black man. It was a perfect storm for Charlotte, developed in an environment of police caution while a shooting investigation was underway and against the backdrop of what would turn out to be misstatements of family and supporters that fed the storm clouds.

WHAT DID THE MEDIA REPORT?

Two months after the protests over Scott’s shooting, theCharlotte District Attorney, whose office committed itself to a thorough and unbiased review of the fatal incident, revealed his results. Scott had indeed been armed, with a weapon he had purchased illegally, and he ignored repeated and clear police commands to drop the weapon before he was shot. Moreover, the district attorney dismissed the falsehood that Scott possessed only a book when he was shot, noting that multiple false “witnesses” provided misleading accounts of the event in social media.  Fortunately, the district attorney’s statement of the truth of the media fatal encounter did not generate a repeat of the earlier rioting, as it had in Ferguson two years before.

WHAT DOES THAT MEAN, AND WHY DOES IT MATTER?

Like the September 11, 2001 terror attacks that changed a nation, many in law enforcement see their world differently since “Ferguson.”There’s “pre-Ferguson” and “post-Ferguson” policing for cops who have been in the job for a decade or more. The profession sees the world around them as having changed, demanding that policing change as well. Surveys, commentary on broadcast television and in social media, the influence of public officials and other figures serve as powerful indicators that something is different in the relationship between police and their communities.

The fatal shooting of Michael Brown by Ferguson Police OfficerDarren Wilson in August 2014 became a watershed moment in American policing.  Brown’s death uncovered simmering distrust of police and laid bare an atmosphere where residents were standing ready to falsely claim having witnessed a police execution of the teenager, and willing to falsely vilify individual officers as racist killers.

The deaths of American citizens at the hands of police pose far greater challenges when accompanied by misstatements, designed to harm or uttered in ignorance, circulated in the wake of a fatal encounter.  When spread in social media or fanned by the mainstream media, falsehoods, whether willful or negligent, can spawn costly and deadly consequences, as the past three years have witnessed. They help destroy the sometimes-fragile relationships between police and the communities they serve.

When former FBI Director James Comey spoke, in late 2015, of “a chill wind” blowing across the profession, police everywhere already knew it was true.  For many on the front lines of law enforcement, it meant the leading edge of a new threat to the profession, one coming from armchair quarterbacks ready to judge police actions during street encounters captured in viral videos. When homicide and violent crime rates and deadly attacks on police rose in 2015, 2016 and again in 2017; police were ready to point to the perceived causes and, in some places, to pull back from the proactive encounters needed to keep citizens safe. Self-preservation tends not to be the first instinct of America’s police officer as they are the ones who run toward the danger. But, since Ferguson, law enforcement officers know too well that danger is not exclusively posed by armed offenders.  It also can be formed by doing the right thing (morally, ethically, and procedurally), but still falling victim to the media and public’s false narratives.

Since the mainstream narrative is to mistrust the police in the majority of urban and highly populated areas, this conclusion wouldn’t mean all that much as it only seems to affect the individual police officers.  But this has a long-lasting effect on young minorities as well.  Racism and hate are things that are taught, and with these false narratives and discussions becoming as viral as they do, our youth are force fed these stories through their social media platforms and public discussions/protests.  Because of these stories, in their eyes, they honestly believe that the police will kill them if they put their hands up, or if they’re reading a bible in their own car. This creates incidents where, when they do encounter law enforcement, they fight or run as they honestly fear for their lives.  It is the body’s natural instinct when it senses fear; fight or flight.  Those two reactions alone however dramatically increase the potential of being hurt, and only escalate the encounter with law enforcement.  So, now we have a generation growing up who fear this nameless-faceless entity that will always hold them down, and that doesn’t give them the freedom and drive to accomplish anything.

The perpetuation of these false stories, whether willful for neglectful, creates a much more dangerous environment for minorities and for law enforcement.